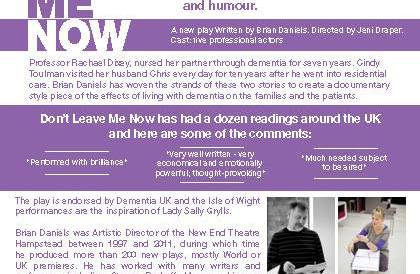 A Star Performance From Greenbox Removals

On Thursday, Greenbox conducted a small office move for a gentleman called Brian Daniels – a Yorkshire based playwright, author and theatre producer. It was great speaking to Brian about what he does and all the famous folk he had met and directed (there was a picture of him drinking a glass of champagne with Cliff Richard amongst his office belongings).

He’d certainly had an interesting life so far with plenty more coming up on the horizon, including a new play he’s written, Don’t Leave Me Now, which will be shown in Portsmouth in the spring. The play looks at dementia and its effects on the family.

It also has some readings in Yorkshire at the Chapel FM in Leeds on the 12th February and at the Cairn Hall in Harrogate on the 26th March. For a little more info on this, please follow the link:

This website uses cookies to improve your experience while you navigate through the website. Out of these cookies, the cookies that are categorized as necessary are stored on your browser as they are essential for the working of basic functionalities of the website. We also use third-party cookies that help us analyze and understand how you use this website. These cookies will be stored in your browser only with your consent. You also have the option to opt-out of these cookies. But opting out of some of these cookies may have an effect on your browsing experience.
Necessary Always Enabled
Necessary cookies are absolutely essential for the website to function properly. This category only includes cookies that ensures basic functionalities and security features of the website. These cookies do not store any personal information.
Non-necessary
Any cookies that may not be particularly necessary for the website to function and is used specifically to collect user personal data via analytics, ads, other embedded contents are termed as non-necessary cookies. It is mandatory to procure user consent prior to running these cookies on your website.
SAVE & ACCEPT